“KORAIS”  Choir invites you to participate in a Festival of Joy, which will take place in the city of Thessaloniki, from 5th to 7th  May, 2023.
This city of North Greece with the mild Mediterranean climate, the hospitality of its citizens and the long interesting history of 2.300 years - shown on its rich ancient monuments-, the city which is located at the crossroads of people and civilizations, can gladly promise you a pleasant and unforgettable stay full of new experiences.
From the next year, our Festival renewed, is addressed to all choirs that have not stopped to sing and dream. The difficult period for all humanity will pass and life will regain its meaning, human contact, collective choral effort, musical expression.
In 2023, we are inviting you to a unique Festival, which thousands of spectators so far, surround it with unlimited love thus creating an atmosphere of enthusiasm and joy and making this World Choir Festival on Musical an excellent event that gives to all the participants special and unforgettable emotions.
The World Choir Festival on Musical is dedicated to Peace, Friendship, Collaboration, Fellowship and Solidarity between people.

IDENTITY  OF  THE  FESTIVAL

The choirs that will participate in the competing part will be judged by an international Jury which will consist of 3 choir directors with a world experience and prestige. The members of the Jury will evaluate   the competing choirs by the technical and artistic performance of their program.

The choirs will be grated based on the following elements :
.  Structure & Degree of program difficulty
.  Sound Quality
.  Quality of Interpretation
.  Tonal Accuracy & Stability

​
The competing choirs, after the judgment of the Jury, will be awarded :

At the discretion of the Jury stands the awarding of another prize with sufficient reasoned criteria.

AUDIENCE  AWARDS
Audience awards will be presented after the universal vote of the audience.

.  The choirs that do not wish to compete, can participate either in the Musical night or in the free program of the Festival.
.   During the performance, each choir must perform five ﻿(5)﻿ songs. Three of them  must be Musicals while the other two  of free
choice. Of course the free choice songs should be consistent with the character of  the  Musical night. They could
originate from pop music, jazz  or from cinema soundtracks.
.  The presentation of the program of each choir will not exceed 15 minutes.
.  The choirs that wish to participate in the free program or the ones that do not have Musical works in their repertoire, can appear
in the certain concert performing works of their own free choice.
.   Dancing performances-choreographies that accompany the choirs are welcome.
.   The Festival provides the opportunity to dance schools or professional dancers' groups to participate with choreographies
inspired by theatrical or cinema Musicals.
.  Τhe choirs are offered a piano by the Organizing Committee. The choirs  can  also accompany their program by other musical
instruments, for the transport  or rental of which are the same responsible, while informing  the Organizing Committee.
.   The choirs are required to submit to the Organizing Committee a copy of the music works (scores) to the performed.
.   Certificates of participation will be awarded to the choirs.

.    The choirs can select the category of the  hotel they want to be accommodated. The accommodation of the
choirs will be in double or triple rooms (if requested), in hotels of  3*, 4* and  5* in the city of Thessaloniki.
or the surrounding  area.
.   For every group of  20 people one person free of charge will be provided.
.   Individual Festival visitors can be hosted at the same prices.
.   Breakfast, lunch or dinner is offered every day (half-board, according to the accomodation package).
The dinner on Sunday 7th May 2023, which will include full meal, drink and live music, will be given during  the traditional
great Greek feast, that will take place at the closing of the Festival, for all the participating choirs, where each choir can
present dances and songs from the place of its origin.
.    The choirs from abroad will be escorted by an English speaking person.
.    Sightseeing around Thessaloniki one of the days at noon.
.    Print festival material to all choirs will be provided.
.    All choirs  will receive a diploma of participation.


COST  OF  PARTICIPATION
( 3 nights with Half Board )


The  cost  of  participation  includes  all  services  mentioned above.

5th May 2023, Friday.
Choirs arrival and welcoming in Thessaloniki, at noon.

6th May 2023, Saturday.
Tour to Thessaloniki ancient monuments and sightseeing of the city for the choirs.
11.30-13.30. Official Festival Opening Ceremony.
Assembly of the choirs at the archeological site of Odeion at the Roman Agora.
Concert with the participation of all the choirs.

20.00-22.30. MUSICAL NIGHT. Choirs concert.
Ceremony Hall of the Aristotle University of Thessaloniki.
Αnnouncement of the results of the competition. Αwards of competition prizes.
End of the Festival.
​Gala - traditional Greek party and entertainment with all the choirs taking part at the Festival.

.   Tourism program can be available in agreement with the organizers.
.   At your leisure you can visit resorts in neighboring prefectures of Thessaloniki, like the beautiful crystal clear  beaches of
Chalkidiki and  Pieria, the city of  Edessa with its waterfalls. We are proposing to you an excursion to the mountain of gods -
the  mountain Olympus -, the monasteries at Meteora  and also the unique archeological sites of   Vergina, Dion, Pella ﻿,Amfipoli
or you can enjoy a cruise on the Thermaik Gulf. To see the sightseeing, please click  Here
.   You may rent a coach for your optional excursions outside Thessaloniki.
.   The choirs can arrive earlier or extend their stay in Thessaloniki. The cost per day per person varies depending on the choice of
the hotel class as follows.
.   The choirs, who apart from the English speaking escort would like to have a guide  for their tour in the city they have to ask it
from the Organizing Committee and it is going to be on their own cost.
.    Entrance tickets to museums or leisure activities are not included in  the participation  price.
.    Choirs coming by airplane and will require bus transportation  will be charged  35 €/person extra from the  participation
price.
.   The choirs that arrive at the Festival on their own coaches, they continue moving around on them during the whole Festival,
unless they have agreed otherwise with the organizers of the Festival.

If you are interested in participating in the  12th World Choir Festival on Musical & Competition,  you are kindly requested to complete the   Registration  Form.
In addition, please send us:

The Artistic Committee of the Festival will select the choirs that will participate and they will be informed the soonest possible.

As long as you are selected you will have to submit a deposit of   200€  at the bank account of our Association.
In case of cancellation of the participation, the deposit cannot be refunded.
The rest of the amount of your participation should be paid at full  until the  15th  of  April  2023.

For the best preparation of the choirs their registration forms will be answered directly.

We will be delighted to welcome you to the beautiful and historical city of Thessaloniki.
​
Come join us in a unique Festival of Joy!


On behalf of the Board of the Organizing Committee 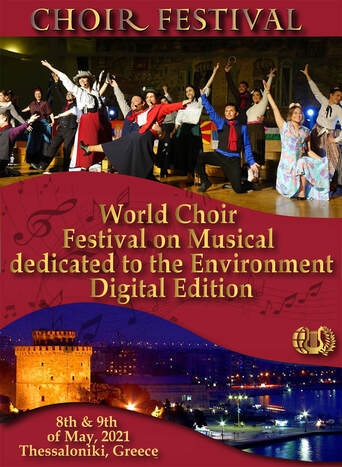 To watch the Festival, click on the links below: 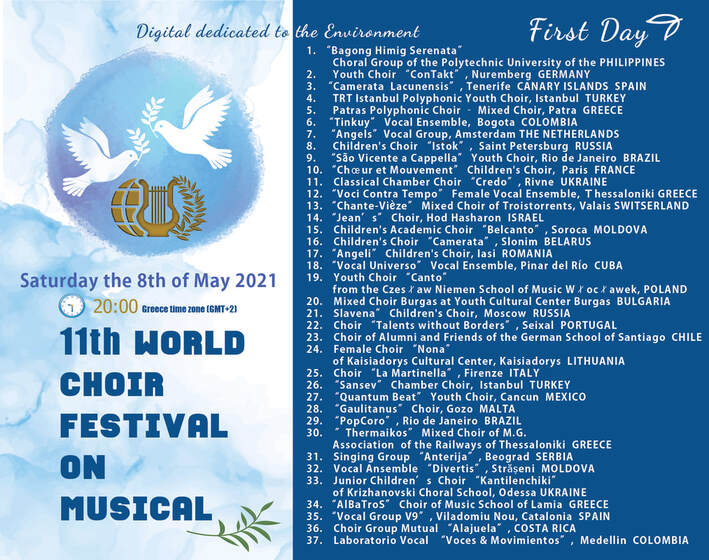 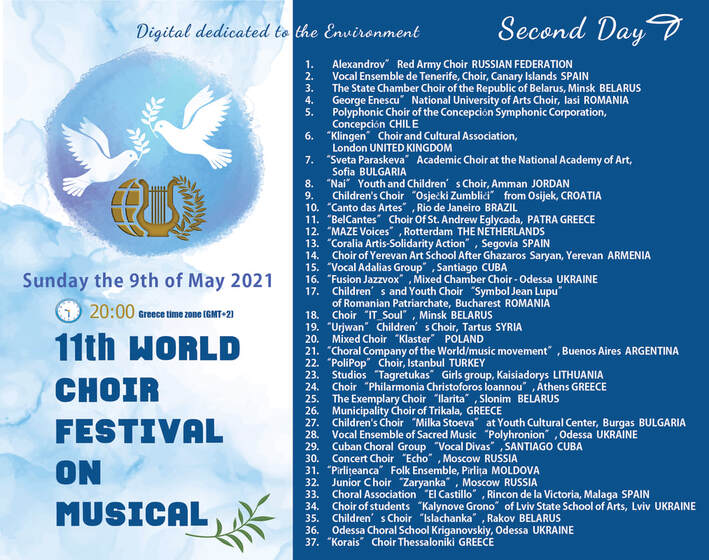 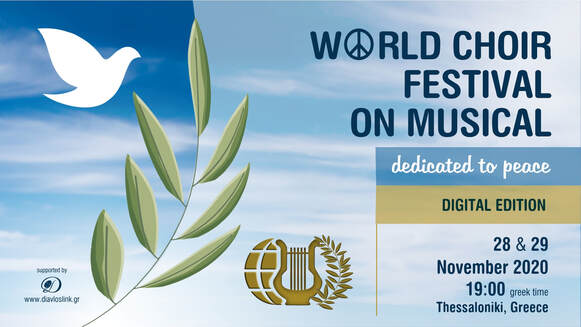 World Choir Festival on Musical dedicated to Peace
Saturday 28th and Sunday 29th, November  2020 at 19.00 (Athens time)
To watch the Festival click on the links below: 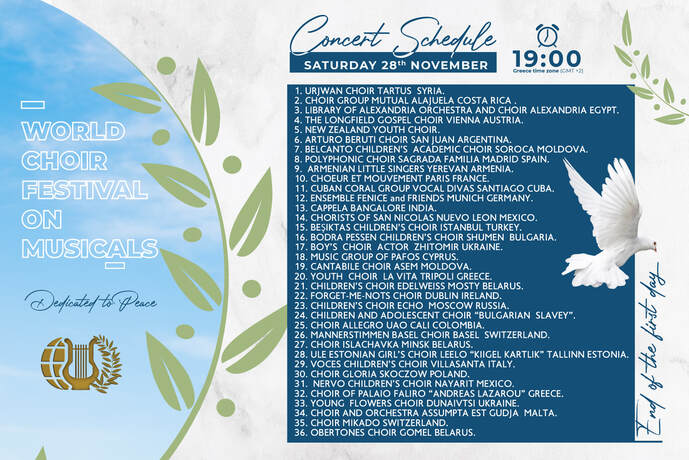 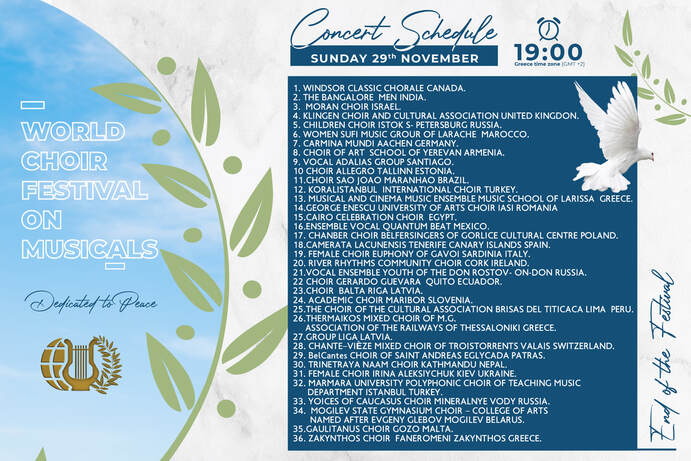 The World Choir  Festival  on Musicals  is an innovating idea of the president and the members of the Board of  "KORAIS"  Choir in their quest to strengthen the vocal color of the choir for better performance  and  scenic expression.And since it is the combination of words, music, movement and technical aspects of the entertainment as an integrated whole, Musical  has met huge recognition and acceptance all over the world through famous films and musical performances in the European and American theaters.

World Choir Festival on Musicals objectives:
.   To make Musical a unique genre with lasting value and visibility.
.   To include musical works in the repertoire of choirs all over the world in order to be integrated and
presented in the programs of national and international festivals.
.   To bring together choirs worldwide being able in this way to share great moments and emotions through
original stage performances of musical works.
.   To promote choral meetings in Europe and internationally.
.   To establish the World Choir Festival on Musicals as a distinguished art institution  internationally, dedicated to Peace,
Friendship, Collaboration, Brotherhood and Solidarity of people.
.  To highlight the important role of the choir as a live promoter of the musical works, as an art form of the
world’s cultural heritage.

2nd   World  Choir  Festival  on  Musicals.
The 2nd World Choir Festival on Musicals was held by "KORAIS" Choir, in Thessaloniki, on the  28th and  29th of April, 2012.
The year 2012 is a very important year for the recent history of Thessaloniki because the city celebrates 100 years from its liberation.
The Festival was integrated as part of the events of the Municipality of  Thessaloniki for the centenary of its liberation.

Objectives  of  the  Festival  Organizing  Committee :
.   To arouse the interest of more and more organizations -local, European and international -  associations
and simple citizens as well to attend the three days festival.
.  To motivate the greatest human potential for the right preparation and perfect organization of the festival
and to achieve the best desired result.
.   To succeed in bringing together choirs from many countries and different continents thus creating an
atmosphere of mutual understanding  and enhancing the cultural cooperation among the people.